Cameron holds a variety of both public and private locations with historic significance. The public venues include the Tuggle Monuments, Depot Museum, Veteran’s Memorial, and The Old School.

Notable private properties such as the old Musser Mansion located at the corner of Chestnut and Fourth Streets. This was the home of Cameron's first and very colorful Mayor, Solomon Musser. 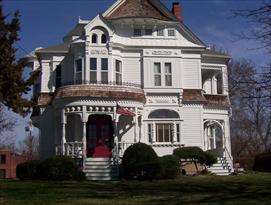 This home on South Chestnut Street belonged to Ted Sanders who was a close friend of Harry S Truman. President Truman is said to have visited is friend here on many ocassions.

In 2005, for the City's Sesquicentennial (150th Birthday) a 'Walking Tour of Historic Cameron' was researched by Clela Fuller and organized by the Cameron Historical Society (Sponsored by the Sesquicentennial Committee) the attached document is an Adobe PDF version of the original pamphlet for the tour.